The word ‘percentage’ has a pretty simple and specific meaning, but the meaning of the word is gradually becoming more generic, like Kleenex or Xerox. Whether it’s the Mythbusters or Hockey Night in Canada the word percentage is increasingly used to just mean ‘ratio’ or portion. That’s a shame because it adds ambiguity to all the traditional uses of the word. It’s wrong, and should be corrected.

The meaning of percentage is encoded in the word itself. ‘Percentage’ means ‘per hundred’ (from the Latin for hundred) so when you say “50 percent” you are saying “50 per 100, or half.

The save percentage of a goalie is pretty simple to calculate. If there were 100 shots on goal and the goalie stopped 97 of them then the goalie has a 97% save percentage. The general formula, useful when the number of shots wasn’t exactly 100, is: 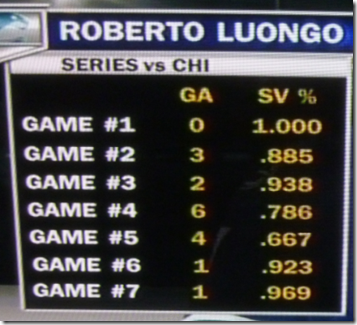 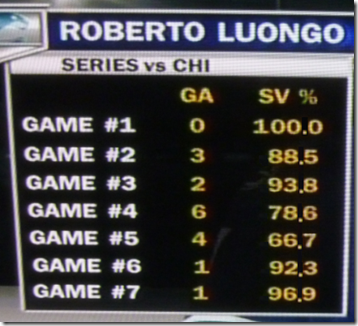 Wow. 66.7%? That’s really bad. I’ll bet that Tim Thomas could have laid down in the net and had a nap and still would stopped that high a percentage of the shots.

I'm a programmer, working for Google, focusing on optimization and reliability. Nothing's more fun than making code run 10x as fast. Unless it's eliminating large numbers of bugs. I also unicycle. And play (ice) hockey. And sled hockey. And juggle. And worry about whether this blog should have been called randomutf-8. 2010s in review tells more: https://twitter.com/BruceDawson0xB/status/1212101533015298048
View all posts by brucedawson →
This entry was posted in Math. Bookmark the permalink.

1 Response to Percentages are Confusing