Backin’ Up is Hard to Do

All I wanted to do was backup my laptop. I’d been doing ad hoc backups for years (a batch file that zips and copies all the important directories) but that system was clearly insufficient. Replacing my ad hoc system with something real was way more complicated than it should have been.

If you remember just one thing from this post, remember 0x8078002A.

And remember the importance of demanding software that just works.

Still annoyed after all these years (update February 2014)

I just bought a 4 TB backup drive from Costco. It doesn’t work with Windows 7’s image backup system and with this particular drive there is no way to make it work. I returned it. Sorry Costco, it’s Microsoft’s fault, but I still had to take it back. Apparently only Western Digital’s large drives can be made to work with Windows 7’s image backup. This problem has been fixed in Windows 8, but Microsoft needs to understand that people aren’t going to upgrade to Windows 8 in order to get backups to work – they’re just going to be annoyed, or switch to OSX.

More details and other updates below.

I initially tried buying a 2 TB backup NAS setup but it had a driver bug which made my laptop slow. That’s been fixed, but Windows Backup doesn’t support network drives unless you’re running a super-duper version of Windows. This is not entirely obvious, but I found the information in Windows Help:

I then tried a 3 TB Western Digital USB drive. And it eventually worked.

I initially told Windows to backup using the default settings and then waited. For hours. I didn’t time it but I did run a bunch of errands and then go for dinner and it was still going. And then it failed:

Wow. Failing is annoying, but failing after about six hours? That’s really horrible. Luckily Windows Backup gave me a clear and informative error message that told me exactly what to do in order to resolve my problem. And yes, I do commute primarily through sarcasm.

What Windows Backup really gave me was the dialog above with the More information button. If I clicked that I got this dialog: 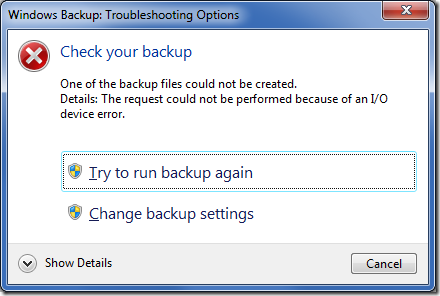 And if I clicked Show Details I got a bit more information:

Notice the hexadecimal error code near the bottom. Then if did a web search on 0x8078002A and clicked on the correct link:

This problem is caused by an issue with the Windows 7 Backup and Restore utility when using drives with 4K [sic] Logical sector sizes, which are found on WD 2.5 TB and larger external drives. This is different from an “Advanced Format” (AFD) drive which use 4K [sic] physical sector sizes. AFD drives should not cause this problem.

My eyes are glazing over. Feast your eyes on the chart listing support for various sector size: http://support.microsoft.com/default.aspx?scid=kb;en-US;982018

Unfortunately my drive, apparently, has 4KiB logical sectors which are not supported, at least not for the image backup stage of Windows backup.

4-KiB sectors are becoming common for a few reasons. One is that the larger sectors are slightly more efficient, but another reason is that the Master Boot Record partitioning system (the old way of formatting drives) can only handle four billion (technically 2^32) sectors. With 512-byte sectors that sets a limit of 2 TiB (2.2 TB). Drives larger than that either need to use 4-KiB sectors (letting them go up to 16 TiB) or they need to use the GUID partition table (GPT partitioning scheme) which allows more sectors.

Set a course for the 512 sector

Western Digital recognized that this is a problem and they let consumers reformat their drives to use 512-byte logical sectors and the GPT partitioning scheme. This will make it incompatible with Windows XP but I don’t care about that. So, as recommended, I ran the Western Digital Quick Formatter tool. But before getting to that tool, feast your eyes on this warning:

Think about that. I’m doing all of this so that I can backup my data, and this warning is basically saying “before backing up your data please backup your data.” Yes I know they are talking about the data on the backup drive, but still. It’s funny. I’m laughing inside.

The default is not the default

Later versions of their formatting tool have changed (and moved) the choices. The correct choice if you want 512-byte sectors is “Most Compatible”.

If you’re getting impatient let me just say that the reformatted drive worked. I got the backup I wanted, finally, and I’ll get another backup every Sunday. But I have a few more things to complain about. And get off my lawn.

Western Digital has an option to format their big drives with 512-byte sectors, but Seagate does not, and I see no sign that other drive manufacturers offer such an option. When my wife bought a 4 TB Seagate backup drive from Costco she failed to verify that it could support 512-byte sectors (I don’t know what she was thinking) and it can’t so we had to return it. Seagate supplies their Disc Wizard software that lets you choose between MBR and GPT partitioning schemes, but in both cases it uses 4-KiB sectors. Seagate has claimed in a tweet that Windows 8 fixes this, and I’m using an 8 TB drive without problem so I think that is true.

I have my computer set up to require a password in order to get administrator access. I think this is the only sensible way to set up a computer. It means I can hand it to friends and relatives without worrying that they will do something crazy that will compromise it. Normally the need to type in a password for elevation is not a problem, but when setting up backups, and diagnosing problems with backups, it is absurd. Feast your eyes on the backup control window:

Every shield icon is something that requires me to type my password. Setting up a backup, backing up now, retrying a failed backup, seeing details of a backup – type your password please. I did all of these operations multiple times and I got a lot of typing practice. If I could launch the backup UI as administrator and then control all of its functions without further passwords then that would be fine, but that does not work. There are actually four more shield icons in the backup control panel: 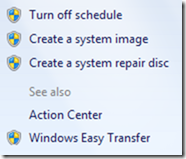 If (almost) every option in your UI requires elevation then maybe you should allow your UI to be elevated!

I’ve had to use my backups a few times to restore individual files, and they have worked. However one time I found that the backup had mysteriously stopped a few months prior – the drive had been unplugged. Windows didn’t bother to notify me that the backup drive was inaccessible – but luckily the file I needed was still available. However a backup system that stops without loudly notifying the user? Not acceptable.

More recently I used the image backup to do a hard drive upgrade – see this blog post for more details.

A related problem with Windows Backup is it handles out-of-space conditions poorly. To make Windows Backup useful for non-experts (like my parents) it needs to keep running, which means it needs to have an option to automatically age-out old backups. Instead Windows Backup seems to halt when the backup drive fills up. That means that its implicit policy is that old files are more important than new files.

Windows Backup does have an option for controlling how many system image backups are retained, but the UI is incomprehensible to me:

Hexadecimal error codes are not okay

This is not a good user experience. Backing up is important, it can be easy, it should be easy, but right now it is a complete disaster.

Sure, if I’d used Western Digital’s backup program I would have avoided this problem, but I didn’t want to. I just wanted a big drive that I could backup my data to using the software of my choice.

Everybody should back up. Therefore backing up needs to be easy.

I'm a programmer, working for Google, focusing on optimization and reliability. Nothing's more fun than making code run 10x as fast. Unless it's eliminating large numbers of bugs. I also unicycle. And play (ice) hockey. And sled hockey. And juggle. And worry about whether this blog should have been called randomutf-8. 2010s in review tells more: https://twitter.com/BruceDawson0xB/status/1212101533015298048
View all posts by brucedawson →
This entry was posted in Computers and Internet and tagged backups; Western Digital; sector size; 0x8078002A; large drives large sectors; logical sectors. Bookmark the permalink.

17 Responses to Backin’ Up is Hard to Do