Traditionally there have been just two ways to increase your speed on a unicycle: you could get a bigger wheel, or you could pedal faster. Now there is a third option. 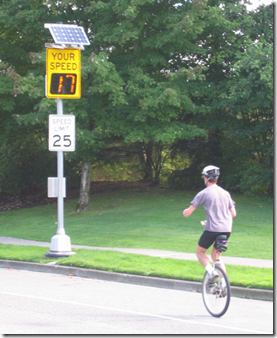 Unicycles are like fixies – there is a direct connection between the pedals and the wheel. The wheel and pedals cannot rotate independently, and being able to slow the wheel by applying back pressure to the pedals is crucial – it’s how you stay balanced.

Most unicycles have a one-to-one connection between the pedals and the wheels, and this leads to the rule mentioned above – to go faster you must pedal faster, or buy a bigger wheel. Now, however, there exist multiple designs for geared unicycles, and one of these geared designs allows for switching between two gears on the fly.

The biggest unicycle wheels in common usage have a 36 inch diameter. With this size of unicycle a single pedal revolution will take you about 9.4 feet. More usefully, if you pedal with a cadence of 100 rpm you will go 10.7 mph. There are a few unicycles with 43 inch wheels and other large sizes but they start to become impractical. Since the pedals are mounted on the wheel’s axis a large wheel requires long legs. Large wheels also get heavier, or are made of unpleasant solid-rubber in order to keep the weight under control. A 43 inch wheel gives less than a 20% increase in speed at the same cadence, and it rarely seems worth it. A 36 inch wheel seems to be the sweet spot.

You spin me round and round

Lance Armstrong is famous for having a high cadence. Whereas most professional cyclists pedal around 90 rpm, and recreational cyclists are typically slower, he sustains rates of about 110 rpm.

Bicycle cranks tend to be long – typically 165 mm or 170 mm – presumably from years of research into the most efficient length. However when you have one gear and it’s not a high gear the tradeoffs are different, so high-speed unicyclists ride on much shorter cranks, to facilitate faster spinning. My maximum speed on a 36” wheel was done with 125 mm cranks, but other riders go down to about 100 mm.

When you hit the limits of wheel size and pedaling fast the next logical step is to add gears.

The simplest way to gear up a unicycle is to take a ‘giraffe’ unicycle – one with the pedals above the tire and a chain drive going down to the axle – and put a larger chain ring at the top than at the bottom. You can get any gear ratio you want this way. You can’t change gears on the fly – derailleurs don’t work on unicycles – but that’s okay. The unicycle shown in these pictures has a twenty inch wheel with exactly twice as many teeth on the top gear as on the bottom, making it equivalent to a forty inch wheel.

The biggest limitation is that you are sitting up fairly high. This means the entire assembly 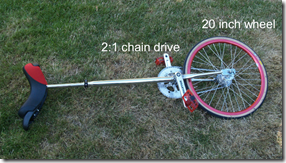 weighs more and the chain is long enough that it will inevitably be a bit loose. But, within reason this can work. The unicycle in the pictures is a “Penguin Giraffe” made by Abram Clark. Its small wheel is not particularly safe when it meets bumps and rocks in the road, but it can go over 15 mph. I used it once in a twenty kilometer road race against riders on more ‘normal’ racing unicycles. I didn’t win, but I wasn’t last, and I enjoyed the delicious absurdity of it.

You can see my over-produced Penguin Giraffe video on youtube.

Using a system of planetary gears it is possible to put a tiny transmission inside the hub of a wheel. Making such a hub work in a unicycle is complicated by the need for full back pressure. An early version by Greg Harper had a 1.5:1 gear ratio and could not be shifted.

Greg then created a hub that could be shifted with about a minute of work with tools and put it in a unicycle he called Blue Shift, pictured at right. By locking the arm (circled in red) to the hub or to the frame you could switch between 1:1 or 1.5:1. It was the beginning of the geared age.

Then, Florian Schlumpf commercialized a variation of this that could be shifted on the fly. With this hub you can shift up with a click of one heel, and shift down with a click of the other, while riding. In the picture to the right you can see the planetary gears, sun gear, and some tricky mechanisms to allow shifting on the fly.

In the picture below you can see the hub – big enough to contain the planetary gear system – and one of the shifting knobs, and the dual drilled cranks to allow bonus flexibility in crank length.

I was lucky enough to get to test drive all of these planetary gear unicycles, and I did eventually purchase a Schlumpf hub in a 29” unicycle. 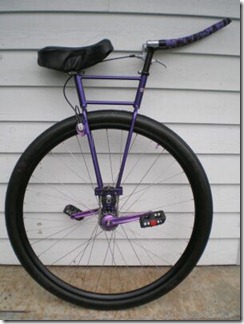 A final option for gearing up was developed by Pete Perron. In this system the crank shaft goes through the drive shaft but they rotate independently. Power is transferred through a set of four cogs and two chains – up from the pedals to a jackshaft, then down to the drive shaft. Unlike a geared hub, you can get virtually any gear ratio you want, and unlike a single chain design there is very little extra weight and no extra height.

Pete made two versions of this, both with 36” wheels, and I just purchased the second one, named Red Menace.

In the picture below you can see the short chains going from the cranks, up to the jackshaft, and then back down to the axle.

I’m enough of a math nerd to appreciate the beauty of the gear ratios that can be realized. Each chain gears up a bit, and both chains gear up by the same amount. Therefore a typical ratio is (24/20)*(24/20), or 1.44:1, which you get by having both chains going from a 24-toothed cog to a 20-toothed cog. Other obvious ratios include:

You can also gear it down, or do other more creative ratios.

My top speed to date is using the 1.44:1 gear ratio and 170 mm cranks to get up to 20.6 mph. It’s definitely exciting when you start losing your balance on one wheel at a higher speed than you can run. So far I have had no high-speed falls (nothing over 15 mph), but pushing the limits does come with risks. It’s also cool/scary to think that with some changes to gearing I should be able to go significantly faster.

It turns out that the forces involved in a dual chain-drive unicycle are quite extreme – I wrote about those forces in Geared Unicycle Engineering Challenges, where I tell the sad story of almost breaking my dual-chain unicycle while changing gears.

Riding a unicycle is, like walking, a constant state of near falling.The rider needs to perform tiny adjustments many times per second in order to keep the center of support directly

underneath the rider’s center of mass. If you start falling forwards then you need to instantly pedal faster. If you start falling backwards then you need to instantly push back on the pedals. These corrections are happening multiple times per second, usually without the rider even noticing. It’s only when the corrections almost don’t work that the unicycle perceptibly moves from the vertical and the rider’s heart rate goes up a bit.

The derailleurs which are used for gearing on bikes don’t let you apply back pressure. If you pedal backwards you freewheel, and if you stopped the axle from freewheeling then pedaling backwards would just damage the gearing system.

It is possible to ride a unicycle without being able to pedal backwards – doing a wheelie on a bike that freewheels proves this – but it is not stable, and it doesn’t work downhill. Technically it is possible to use a brake as a substitute for pedaling backwards, and anybody who thinks that that is a good idea is welcome to try it.

The challenge in unicycling is the front/back balance. The left/right balance is similar to the challenge of riding a bike with no hands – easy once you are used to it, and rarely the source of exciting falls.

About the closest thing to a rational explanation for why I unicycle is that it is an inefficient form of transportation (less efficient than a bike, but more efficient than walking or running) and is therefore great exercise. And a fun challenge. And because improving my balance skills lets me try cool toys. And because it is there. And because owning three of the coolest geared unicycles in the world (shown together below) is still much cheaper than buying fancy cars or smart-phones.

Speed does not equal distance

While my top speeds have been set on geared unicycles, my longest ride ever was done on an ungeared 36” unicycle. I rode the Seattle to Portland Bicycle Classic on a unicycle, covering 204 miles in two days. Some day I’ll do that again on a geared unicycle, which should make it a bit faster.

Apologies for the mixture of metric and imperial units.

For more information read Geared Unicycle Engineering Challenges and Riding Fast on One Wheel–Ignite Talk. Or look at the complete series.

I'm a programmer, working for Google, focusing on optimization and reliability. Nothing's more fun than making code run 10x as fast. Unless it's eliminating large numbers of bugs. I also unicycle. And play (ice) hockey. And sled hockey. And juggle. And worry about whether this blog should have been called randomutf-8. 2010s in review tells more: https://twitter.com/BruceDawson0xB/status/1212101533015298048
View all posts by brucedawson →
This entry was posted in Unicycling and tagged geared unicycles, giraffe, one wheel, penguine giraffe, stp, unicycles, unicycling. Bookmark the permalink.

40 Responses to Riding Faster on One Wheel: Geared Unicycles