I own three geared unicycles that use three different designs. One is a “mass-produced” commercial design and the other two are one-off custom designs.

One risk with buying a custom built geared unicycle is that it may not have gone through as rigorous a design process as a commercial unicycle, and there may be some unexpected engineering problems. Due to this, and due to user error, I almost ripped apart one of my geared unicycles because of unforeseen stresses.

I hit this problem when changing gears on Red Menace, my dual-chain geared unicycle.

Red Menace is an experimental unicycle which I purchased from its creator, and it is capable of being set to practically any gear ratio. It allows unicycling speeds limited only by the skill and bravery of the rider. To change gears you take off the right crank, change the sprocket on it, and change the sprockets on the jack shaft.

According to the standard calculations of mechanical advantage that gives a force multiplier of 3.7x. If I put my full 180 pound weight on one pedal then this says that the tension on the chain will be 666 pounds.

I’ve never measured how much force I actually put on the pedals of my unicycles. The requirement that pedal force be used both for forward progress and for balance makes it harder to put all your weight on the pedals, but when I climb hills I often pull up on the seat, so it’s possible that the peak pressure is even greater than my weight.

666 pounds is a lot of pull on that chain. Bicycle chains can handle that, but other parts are not so lucky.

The chain goes to a jackshaft and pulls on one side of it with that 666 pounds of force, pulling it towards the wheel/crank axle. The jackshaft axle transfers the force to its other side, to a slightly larger sprocket. That sprocket then transfers the force down to a fourth sprocket that is attached to the wheel. That second chain is also pulling the jackshaft towards the wheel/crank axle. The force is slightly reduced because the inner sprocket is larger than the outer – I currently have a 22/20 cog pair – but that’s still another 605 pounds of force on the jackshaft, for a total of about 1271 pounds of force.

There are a pair of chain tensioners which are used to pull the jackshaft to the appropriate location after changing gears. They each consist of a bolt that is attach to the jackshaft axle at one end and attached to the frame box at the other end by a bracket. You can see one of the brackets circled in green on the left side of the picture below, together with the estimated forces on the chains, and the slightly different sized cogs:

The brackets are flimsy things made out of thin metal. In hindsight it is obvious that they were never meant to take over 600 pounds of force each. You can see one of the chain tensioner brackets to the right, together with the damage caused by the excessive forces. The top surface has been pulled down and started to tear apart. Meanwhile the sides are bowing out. The entire thing is a lot less square than it used to be, and is very close to failing.

The fix is in 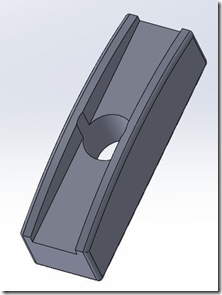 I was pretty bummed about damaging my wonderful toy and I mentioned this to one of my coworkers, along with my concern that I wouldn’t be able to find replacement parts. Their response was to remind me that we have a machine shop at work. Cool!

I took the old parts to one of my coworkers and asked if he could make replacements. About ten minutes later I received a CAD model (shown to the right) of the parts that he was going to custom mill for me.

The old and new parts can be seen below. You can see the damage on the original parts at the bottom, and the much stronger and very nice looking new parts at the top.

The new parts are much stronger than the old ones and can probably handle the forces, but the other components of the chain tensioners still can’t. The nuts were showing signs of stripping, and the welds probably weren’t designed for that sort of force. Therefore it is very important that I keep the jackshaft tightened up as much as possible.

The designer of the unicycle hadn’t realized the magnitude of the forces involved and he is now wishing that he’d made the frame box out of sturdier materials. If anybody makes a new unicycle based on this design they should keep that in mind.

I'm a programmer, working for Google, focusing on optimization and reliability. Nothing's more fun than making code run 10x as fast. Unless it's eliminating large numbers of bugs. I also unicycle. And play (ice) hockey. And sled hockey. And juggle. And worry about whether this blog should have been called randomutf-8. 2010s in review tells more: https://twitter.com/BruceDawson0xB/status/1212101533015298048
View all posts by brucedawson →
This entry was posted in Unicycling and tagged geared unicycles. Bookmark the permalink.