So many possible introductions to this one:

O(n^2) algorithms that should be linear are the best.

Note that, despite breathless and click-baity claims to the contrary, the performance of Chrome and Chromium was never affected by this bug. Only Chromium’s tests were affected, and that slowdown has been 100% mitigated.

CFG ended up being a big part of this issue, and eight months earlier I had hit a completely unrelated CFG problem, written up here.

I often find odd performance issues all on my own, but sometimes they are given to me. So it was when I returned from vacation to find that I’d been CCed on an interesting looking bug. Vivaldi had reported “Unit test performance much worse on Win10 than Win7”. unit_tests were taking 618 seconds on Win10, but just 125 seconds on Win7.

Update, April 23, 2019: Microsoft received the initial “anomaly” report on the 15th, the repro steps on the 21st, and announced a fix today. Quick work!

By the time I looked at the bug it was suspected that CreateProcess running slowly was the problem. My first guess was that the problem was UserCrit lock contention caused by creating and destroying default GDI objects. Windows 10 made these operations far more expensive, I’d already written four blog posts about the issues that this causes, and it fit the symptoms adequately well.

But! I don’t get paid to guess at the causes of problems, so I built Chromium’s unit_tests.exe, profiled it myself, and quickly found that my initial theory was completely wrong.

unit_tests.exe runs about 10,900 tests. It creates child-process instances of itself to run them, with each child process running ten tests. That means it needs to create about 1,090 child processes. The child-process creation is multi-threaded, but serialized by a lock in order to control handle inheritance. I verified by looking at CPU Usage (Precise) data in an ETW trace that the main process was spending huge amounts of time waiting on its lock around the CreateProcess calls.

The easiest explanation for why there was so much contention for the lock around CreateProcess would be that CreateProcess was running slowly, and indeed it was taking about 320 ms to execute. The CPU Usage (Sampled) data showed exactly that. It showed that 99% of the CPU time in the main unit_tests process was inside of CreateProcess, and 98.4% of the samples were in a single function. To be clear, that 98.4% of samples was not in a function and its children – those samples were all in the same function. It was the hottest hot-spot you can possibly get. The function was called ntoskrnl!MiCopyToCfgBitMap, and here is some CPU sampling data from a worst-case scenario – notice that in this case more than 99.5% of samples are in the one function: 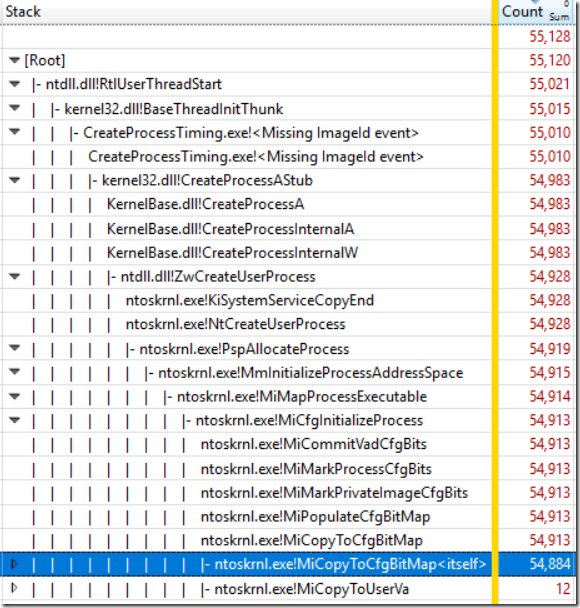 MiCopyToCfgBitmap is clearly related to CFG, also known as Control Flow Guard. CFG is also something I’ve tangled with before. Oddly slow virtual memory scanning of endlessly leaking CFG memory was causing gmail hangs for a while until we added a mitigation in Chrome’s JavaScript engine.

CFG is a security feature that uses a bitmap to track which indirect branch targets are valid and MiCopyToCfgBitMap was clearly initializing that bitmap. unit_tests.exe is a 122 MB executable and it has about 180,000 valid indirect branch targets but… computers are really fast. The CFG bitmap for unit_tests.exe is only about 1.5 MB and it’s hard to understand why it would take about 780 million clock cycles to initialize such a small amount of data.

Since CFG is a security feature we want to leave it enabled for all of the executables that we ship. But we don’t actually need it for our tests. So, I landed a change that turns off CFG for our test binaries, and suddenly unit_tests.exe was running about five times faster, with CreateProcess itself now running about 20 times faster (Vivaldi measured CreateProcess as 200 times faster after the mitigation!). Our other large test binaries also run a bit faster, but I didn’t spend much time measuring their improvements.

My best theory for why MiCopyToCfgBitMap was so slow was that it was using an O(n^2) algorithm. That would explain why this performance issue had gone unnoticed by Microsoft, and it would explain why initializing such a small amount of data was taking so long. Ever since I wrote a “sooper-fast (TM)” version of std::vector (before std::vector existed) and found that it had abysmal performance due to my use of a linear growth strategy I have had a deep respect for the ability of O(n^2) algorithms to make fast computers run slowly.

In one trace that I grabbed I found that more than 95% of the samples in my test process were in just seventeen instructions in MiCopyToCfgBitMap, which is tough to do without an n^2 algorithm: 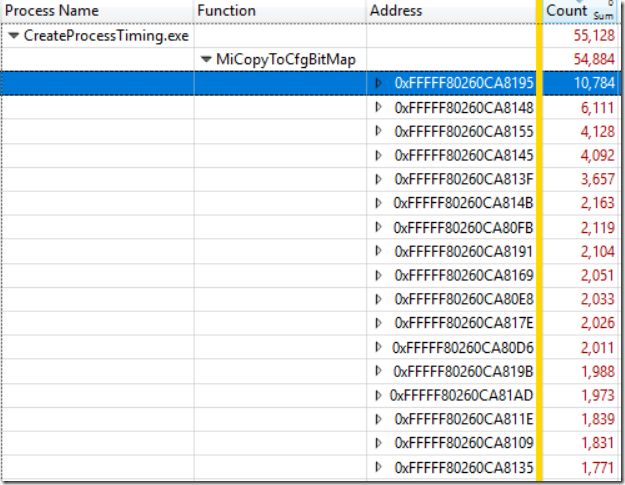 My first attempt at investigating was to grab the sample counts and addresses from the ETW trace, grab the disassembly of MiCopyToCfgBitMap from livekd, write a script to merge them, and then analyze the annotated disassembly. This gave a nice visualization of a small number of instructions accounting for the vast majority of the CPU time (the lea/bt/jae trio account for 23% of CPU time in the process):

But the function was too large to be easily reverse engineered, so I moved on to another tactic. I wrote a Python script that generated classes with virtual functions. Each virtual function is necessarily an indirect branch target so this lets me create binaries with arbitrarily large numbers of CFG entries. I eventually settled on generating 16 source files, each with 50 classes, each with 0 to 1,600 virtual functions. That gave me the following CFG entry counts:

I then compiled seventeen different variants (using /MP for parallel compilation), using this command to verify how many CFG entries I was getting:

Finally I measured CreateProcess time of each version with a simple test harness. That gave me this beautiful graph: 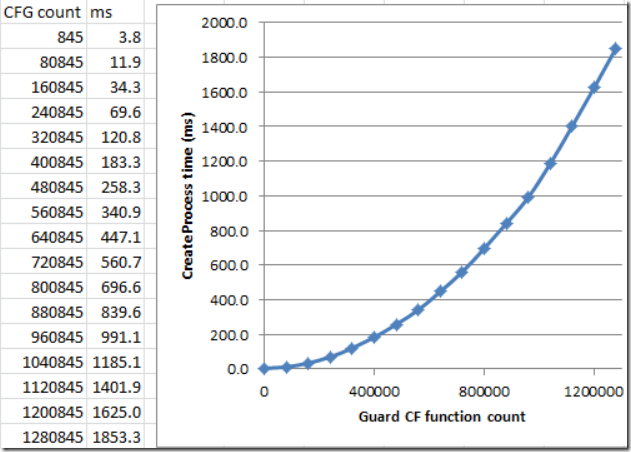 That n^2 graph is so perfect that I’d be suspicious if I hadn’t measured it myself. Plotting the same data as CFG count against sqrt(CreateProcessTime) gives a perfectly straight line (with a tiny kink at the beginning for the fixed cost of actually creating a process):

I don’t know what MiCopyToCfgBitMap is doing but it clearly has two nested loops, and can’t efficiently handle large executables.

The input to this function is, roughly speaking, a sorted array of function pointers. The output of the function is a bitmap, one byte for every 64-bytes of code. This is instrinsically a linear algorithm, which is why it being O(n^2) was so surprising.

After creating the necessary gn file (build script) changes to turn off CFG for the test binaries I did one last test, to verify that my fix worked, and to revel in the joy of watching the tests run so much more smoothly.

My revelry was cut short when several of the tests repeatedly timed out and my test run showed no signs of completing at all. It made no sense. I had done a clean run with my fix just a few minutes before, I’d made no code changes, and now I was seeing a new and different form of pathological test performance. WTF!

I grabbed another ETW trace and quickly found that some of the tests were spending 60+ seconds calculating the size of a directory. The current directory. Previously I had run the tests from the output directory, and this scan would take about 4 seconds – fast enough that I didn’t notice it. For some reason on the last test run I had run the test from the Chromium source directory and that directory takes much longer to fully scan.

With that realization I was able to get the clean test run that I wanted (I went back to running from the output directory) and I then filed a bug for the tests with the bogus directory scanning. They are supposed to be testing the behavior of the AppInfoSummaryPanel, this panel includes a display of the size of the app, and the test never specified what directory should be scanned. This bug costs a few seconds every time unit_tests is run, and occasionally costs a lot more, but it should be easy to fix.

Sometimes the most important piece of information is just the knowledge that a piece of code runs faster in one environment than the other, or some other clue that improvement is possible. As soon as Vivaldi pointed out that unit_tests.exe ran slower on Windows 10 than on Windows 7 a solution was inevitable.

Microsoft has been notified and I assume that they will investigate, and fix the issue if possible. There is no sign that this affects Chrome itself because only large .exe files are affected.

This post is sort of a continuation of an ongoing series about making Windows slower.

CFG was designed to allow efficient checking of the validity of indirect branch target addresses. However it shipped with three significant inefficiencies in other areas, and the second one is still not fixed:

I'm a programmer, working for Google, focusing on optimization and reliability. Nothing's more fun than making code run 10x as fast. Unless it's eliminating large numbers of bugs. I also unicycle. And play (ice) hockey. And sled hockey. And juggle. And worry about whether this blog should have been called randomutf-8. 2010s in review tells more: https://twitter.com/BruceDawson0xB/status/1212101533015298048
View all posts by brucedawson →
This entry was posted in Investigative Reporting, Performance, xperf and tagged cfg. Bookmark the permalink.

29 Responses to O(n^2) in CreateProcess