Sources on twitter say that a fix is in fast-ring builds as of October 2019, build 18999, but unfortunately this won’t ship to a stable release until early 2020. And in late October Microsoft said “We’ve done some work to improve the launch speed of the taskbar jump lists”, with a thank you from one of the developers.

The ETW trace records me right-clicking on the task bar to close two Explorer windows. I used UIforETW’s Tracing to file with the default options, giving me a 20.9 MB trace.

Sometimes the challenge in trace analysis is to find where the issue is, but for this issue that part of the analysis was trivial. There were three clear signals that all pointed to the right place, and a painfully obvious culprit.

The first signal is the input events. UIforETW contains an integrated input logger (anonymized enough so that I don’t accidentally steal passwords or personal information) so I could just drill down to the MouseUp events with a Button Type of 2, which represents the right mouse button. This draws highlights on the WPA timeline for when those events happened – see the vertical lines below: 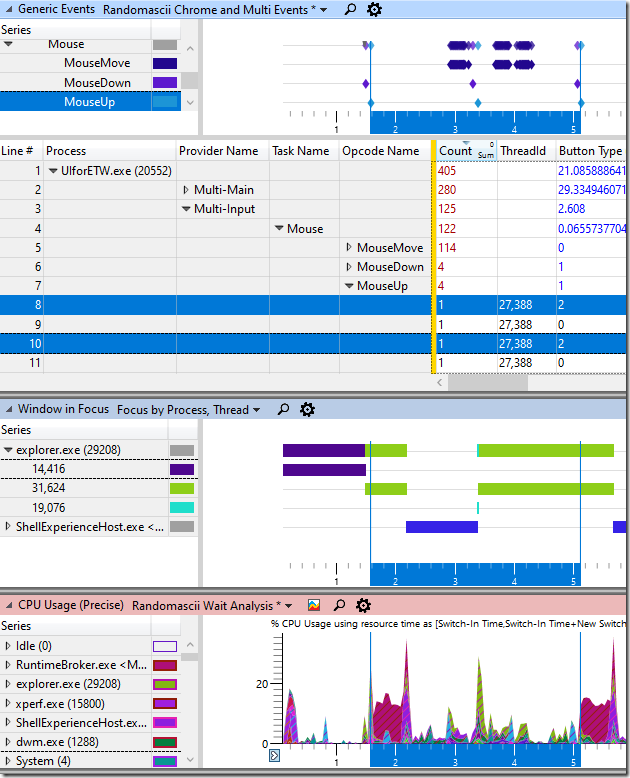 That tells me when I released the right mouse button, and there is very suggestive window focus change that happens about 600 ms later which I’m guessing is when the menu appeared. Finally there is a clear block of CPU activity in RuntimeBroker.exe between the mouse up and window focus events.

The window focus change and CPU activity are not proven to show the end time, but measurements with a screen recorder app showed the menu taking about 660 ms to appear so I’m going to trust them.

The next step was to see what RuntimeBroker.exe was doing. While CPU Usage (Precise) is great for seeing how much CPU time a process is using, and why it is sitting idle, the CPU Usage (Sampled) table is the right tool for figuring out where CPU time is being spent. I drilled down and quickly found 264 samples hitting in KernelBase.dll!ReadFile:

Looking around a bit I found other call stacks that also ended up in that function so I right-clicked on it and went View Callers-> By Function. The view this gave me (with stacks now inverted) shows that a total of 628 samples, along various call stacks, ended up going through that function, accounting for 70% of the 899 total samples in that process:

271 samples in that thread didn’t go through that function, and the remaining samples (not shown) were in other threads.

Note that the 899 samples in thread 10,252 represent two mouse clicks, so about 450 samples or about 450 ms (using the default 1 kHz sampling rate) per mouse-click.

CPU Usage (Sampled) shows CPU time, so disk I/O usually doesn’t show up there because then the thread goes to sleep and waits on the disk. The fact that this shows up as CPU time suggests that the reads were all hitting in the system cache and the CPU time was the kernel overhead (note ntoskrnl.exe on the first sampled call stack) of grabbing data from the cache.

Now that we suspect file I/O it’s necessary to go to Graph Explorer-> Storage-> File I/O. With a bit of column rearranging we get this impressive result:

Think about that for a moment.

Remember that these are calls to the operating system – kernel calls. This means that there is no caching between RuntimeBroker.exe and this file. In fact, the file itself is only 4,027,904 bytes long, so each time I right-click an explorer icon on the task bar this file is read 1.9 times in the slowest possible way.

After some encouragement from readers I decided to delete the file in question and now my explorer jumplist menus are almost instantaneous. I don’t recommend it (you’ll lose your quick access customizations and explorer history) but deleting this file might help you also:

The gains from deleting that file can be seen in this WPA screenshot. The thin vertical lines are right mouse clicks and the bottom row of rectangles represents when the menu started appearing. I deleted the file after the first two clicks and the delay is hugely reduced on the last two clicks:

Alternately “you can use the official doohickey in Settings to both clear (toggle 2x) or disable (toggle 1x) jumplists on Start/Taskbar. Be sure to also disable animations for an extra speed boost.” Thanks Rafael!

This seems like a fixable problem. Once explorer’s taskbar menu latency is reduced it would be great to see the other delays addressed so that all taskbar menus appear instantly instead of with hundreds of ms of delays.

I'm a programmer, working for Google, focusing on optimization and reliability. Nothing's more fun than making code run 10x as fast. Unless it's eliminating large numbers of bugs. I also unicycle. And play (ice) hockey. And sled hockey. And juggle. And worry about whether this blog should have been called randomutf-8. 2010s in review tells more: https://twitter.com/BruceDawson0xB/status/1212101533015298048
View all posts by brucedawson →
This entry was posted in Investigative Reporting, Performance, uiforetw, xperf and tagged menus, ReadFile, taskbar, WIndows 10. Bookmark the permalink.