Posted on November 7, 2009 by brucedawson

Many years ago (2002) I started playing Pikmin for the Nintendo Game Cube. It was a great game that had puzzles, real-time-strategy elements, and a cool game world that seemed to lend itself to creating challenges.

The first challenge – the point of the game – is to recover the thirty missing parts of your ship in thirty game days, before your character dies. So I did that.

The next challenge is to recover the thirty parts of your ship in as few game days as possible. The minimum number was found to be nine. So I did that.

Then I noticed that a friend of mine who had also recovered all thirty parts in nine game days had done it with fewer of his Pikmin dying. I’m sometimes a bit competitive so I decided I would redo the nine-day challenge, but this time with the goal of losing as few Pikmin as possible.

Then things started getting crazy. The first level is trivial, and then I did the second level and only lost a couple of Pikmin. But I’d only lost them through carelessness and I knew I could do better so I kept trying until I finished the second day with zero Pikmin deaths. Then the same thing happened on the third day, and the fourth day. Some of the days were incredibly hard and took dozens of tries to complete with zero deaths. Yes, many Pikmin were slaughtered during these failed attempts, but if you don’t click “Save” at the end of the day then they didn’t really die. 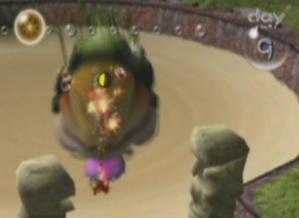 Day 9 was a real concern. I didn’t want to have put in dozens of hours (maybe hundreds of hours – I was pretty obsessed) doing the first eight days perfectly only to lose Pikmin on the last day. But I had no idea how to kill Emperor Bulblax reliably, let alone safely. I was using the usual method of tossing lots of yellow Pikmin with bombs around and hoping that it would work. Sometimes it worked, after killing a dozen Pikmin, and sometimes it just failed.

Somehow I figured out that if I whistled the yellow Pikmin away as the Emperor approached that the damage done to him was bigger than if he ate a Pikmin carrying a bomb. Suddenly I could kill him every time, and about 90% of the time there were no Pikmin deaths. Success was mine!

March 29, 2002 I completed Pikmin for the first time with zero deaths in nine days. Perfect Pikmin.

A posting that describes many of the strategies can be found here:

And a video showing an edited version of Day 9 can be found here:

http://www.youtube.com/watch?v=3xiq8mthopg or watched inline, below.

With Xbox 360 and Xbox Live achievements it is now assumed that games will contain side challenges and that the game will record which of these you have done, but back in the dark ages of 2002 we had to make up our own challenges and then use screen shots and videos to convince other players that we had completed them. Those were simpler times…

I'm a programmer, working for Google, focusing on optimization and reliability. Nothing's more fun than making code run 10x as fast. Unless it's eliminating large numbers of bugs. I also unicycle. And play (ice) hockey. And sled hockey. And juggle. And worry about whether this blog should have been called randomutf-8. 2010s in review tells more: https://twitter.com/BruceDawson0xB/status/1212101533015298048
View all posts by brucedawson →
This entry was posted in Gaming. Bookmark the permalink.