Posted on September 1, 2011 by brucedawson

Windows Update just asked me to install version 4.8 of the Zune software. Okay, fine. Then this license agreement came up:

If I ran the world then any license agreement that was in such a ridiculously small window, and had no way to be copied to the clipboard for easier reading in Notepad, would be unenforceable. Windows 7 requires a minimum resolution of 1024×768. In the screen shot below I’ve shown what the Zune license agreement looks like on such a screen. It is my considered opinion that there is room to make the license agreement window slightly larger:

I’m not running at 1024×768, so on my screen the license agreement looks even more ridiculous. 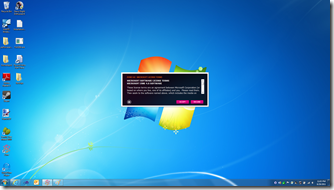 Making license agreement windows larger, or even making them sizeable, is absolutely trivial. There is no excuse.

The text also flashes when you scroll. I can’t read this license agreement. I will not comment on whether I’m going to install the software anyway.

Maybe if the Zune license agreement was easier to read then the Zune testers would have caught this error in the text:

I'm a programmer, working for Google, focusing on optimization and reliability. Nothing's more fun than making code run 10x as fast. Unless it's eliminating large numbers of bugs. I also unicycle. And play (ice) hockey. And sled hockey. And juggle. And worry about whether this blog should have been called randomutf-8. 2010s in review tells more: https://twitter.com/BruceDawson0xB/status/1212101533015298048
View all posts by brucedawson →
This entry was posted in Computers and Internet. Bookmark the permalink.