Type Punning is Not a Joke

I left the last post with a promise to share an interesting property of the IEEE float format. There are several equivalent ways of stating this property, and here are two of them.

Depending on your math and mental state these claims will seem somewhere between fantastic/improbable and obvious/inevitable. I think it’s worth pointing out that these properties are certainly not inevitable. Many floating-point formats before the IEEE standard did not have these properties. These tricks only work because of the implied one in the mantissa (which avoids duplicate encodings for the same value), the use of an exponent bias, and the placement of the different fields of the float. The float format was carefully designed in order to guarantee this interesting characteristic.

I could go on at length to explain why incrementing the integer representation of a float moves to the next representable float (incrementing the mantissa increases the value of the float, and when the mantissa wraps to zero that increments the exponent, QED) but instead I recommend you either trust me or else play around with Float_t in your debugger until you see how it works.

Another thing to be aware of is that while incrementing the integer representation of a float normally increases the value by a modest and fairly predictable ratio (typically the larger number is at most about 1.00000012 times larger – six zeroes, one plus 1/8388608) this does not apply for very small numbers (between zero and FLT_MIN) or when going from FLT_MAX to infinity. When going from zero to the smallest positive float or from FLT_MAX to infinity the ratio is actually infinite, and when dealing with numbers between zero and FLT_MIN the ratio can be as large as 2.0. However in-between FLT_MIN and FLT_MAX the ratio is relatively predictable and consistent.

For double precision floats you could use _nextafter() to walk through all of the available doubles, but I’m not aware of a simple and portable alternative to this technique for 32-bit floats.

We can use this property and the Float_t union to find out how much precision a float variable has at a particular range. We can assign a float to Float_t::f, then increment or decrement the integer representation, and then compare the before/after float values to see how much they have changed. Here is some sample code that does this:

Note that the difference between the values of two adjacent floats can always be stored exactly in a (possibly subnormal) float. I have a truly marvelous proof of this theorem which the margin is too small to contain.

These functions can be called from test code to learn about the float format. Better yet, when sitting at a breakpoint in Visual Studio you can call them from the watch window. That allows dynamic exploration of precision:

Usually the delta is the same whether you increment the integer representation or decrement it. However if incrementing or decrementing changes the exponent then the two deltas will be different. This can be seen in the example above where the precision at 65536 is twice as good (half the delta) going towards zero compared to going away from zero.

Pay close attention to the number of caveats that you have to watch for when you start partying on the integer representation of a float. It’s safe in a controlled environment, but things can quickly go bad in the real world:

A related property is that, for floats that are positive, finite, and non-zero, the integer representation of a float is a piecewise linear approximation of its base 2 logarithm  I just like saying that. It sounds cool.

The reason that the integer representation is (after appropriate scaling and biasing) a piecewise linear representation of the base 2 logarithm of a (positive) float is because the exponent is logically the base-2 logarithm of a float, and it is in the high bits. The mantissa linearly interpolates between power-of-2 floats. The code below demonstrates the concept:

If we drop the results into Excel and plot them with the x-axis on a base-2 log scale then we get this lovely chart: 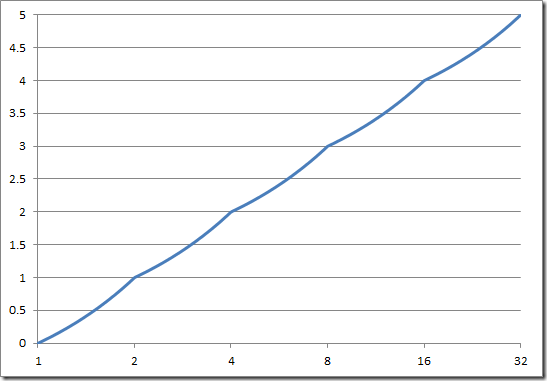 If it’s plotted linearly then the ‘linear’ part of ‘piecewise linear’ becomes obvious, but I like the slightly scalloped straight line better. The estimate is exact when the float is a power of two, and at its worst is about 0.086 too small.

In the last of this week’s stupid float tricks I present you with this dodgy code:

Depending on how you think about such things this is either the simplest and most elegant, or the most complicated and obtuse way of finding out how many bits it takes to represent a particular integer.

The IEEE standard guarantees correct rounding for addition, multiplication, subtraction, division, and square-root. If you’ve ever wondered if this is important, then try this: using the Windows calculator (I’m using the Windows 7 version), calculate sqrt(4) – 2. The answer should, of course, be zero. However the answer that the calculator actually returns is:

This is utterly fascinating. It shows that the calculator is using impressive precision (it did the calculations to 40 digits of accuracy, 20 digits in standard mode) and yet it got the wrong answer. Because the Windows calculator is using so much precision it will, for many calculations, get a more accurate answer than an IEEE float or double. However, because it fails to correctly round the answer (the last digit cannot be trusted) it sometimes gives answers that are laughably wrong.

Having lots of digits of precision is nice, but without correct rounding it can just end up making you look foolish.

In the next post I’ll discuss some concrete examples that show the value of knowing how much precision is available around certain values. Until next time, float on.

I'm a programmer, working for Google, focusing on optimization and reliability. Nothing's more fun than making code run 10x as fast. Unless it's eliminating large numbers of bugs. I also unicycle. And play (ice) hockey. And sled hockey. And juggle. And worry about whether this blog should have been called randomutf-8. 2010s in review tells more: https://twitter.com/BruceDawson0xB/status/1212101533015298048
View all posts by brucedawson →
This entry was posted in AltDevBlogADay, Floating Point, Programming and tagged floating point, integer representation, mantissa, negative zero. Bookmark the permalink.