New Xperf and new WPA in the new WPT

A new version of Windows means a new version of the Windows Performance Toolkit (WPT), the ship vehicle for xperf, WPA and other Event Tracing for Windows (ETW) tools.

I’m a huge fan of xperf/ETW (just look at some of the performance investigations I’ve done with it) and the new version offers enough improvements that I’m switching to WPT 10 immediately, but keeping WPT 8.1 installed, with UIforETW automatically selecting between them. You should too.

Here are some thoughts on why to upgrade and how to do a successful upgrade.

The main improvements in WPT 10 are improved Windows 10 support and some new features in Windows Performance Analyzer (WPA). If you’re recording traces on Windows 10 you should definitely be using WPT 10, but even if you’re not the new WPA features are worthwhile. Here are some of the WPA improvements.

Sometimes it’s the little things that matter and in this case I’m very pleased to see this check box (open the Trace menu, then Configure Symbol Paths).  Trace loading and symbol loading can both take a while and I appreciate that I no longer have to manually initiate the second of these steps. WPA may be somewhat less responsive while symbols are being loaded but it continues to be usable. 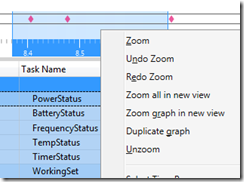 The WPA feature that I am most excited about is zoom undo. I’ve been requesting this feature for years and the wait has been worth it. Zoom undo lets you zoom in to a potentially interesting area without having to open a new view – you always have the option to undo back to where you were. This makes quick, lightweight excursions trivial, as they should be. Adding zoom undo is a recognition that when exploring a trace your position in the timeline is a critical piece of state, and therefore undo is needed to prevent loss of state.

The undo feature is implemented well. It covers both zooms and pans (although the menu always says Undo Zoom) and it animates between the old and new positions, which gives vital visual feedback as to what is happening. The only imperfection I could find is that when you duplicate a view the undo history is not copied. WPA should take a cue from web browsers which copy the undo/redo (back/forward) stack when tabs are duplicated.

WPT 10 adds the ability to graph custom data that is emitted into ETW traces. This can be used with the extra data that UIforETW emits, or can be used to graph your own custom data. This feature is interesting enough that I blogged about it separately, and there is also a video.

You can install WPT 10 as part of the Windows 10 SDK. Or, just download the latest release of UIforETW. If you download and unzip etwpackage.zip then when you run UIforETW the first time it will install WPT 10. If you are running Windows 7 then it will also install WPT 8.1 – see below for why.

You can use lots of different tools to record ETW traces but I recommend using UIforETW (an open source tool I released in April, 2015). It offers helpful features such as trace management, trace compression, easily configurable recording options, and it can integrate extra data into traces (input events, battery, working sets, CPU temperature, power draw, and more) which can then be graphed with WPT 10 (see above). UIforETW also works around bugs in WPT and with WPT 10 there are a couple more bugs to work around.

Note: if you installed an earlier version of WPT 10 then UIforETW will not detect this and upgrade you. In that case just navigate to the third_party\wpt10 directory and run the installer.

Both versions have an anomalous half-second pause during startup where they do nothing. This appears to be caused by some bad input handling – the main thread waits for 2.1/1.5 seconds in msctf.dll!CThreadInputMgr::GetMessageW.

Analysis of WPA would be easier if it had slightly fewer threads. In my test the two copies of WPA both created about 450 threads, with most of these threads living for less than a millisecond. Very strange.

I think that WPA 10 is an improvement over WPA 8.1 so the recommendation is clear: everybody should install WPT 10, Windows 7 users should also install WPT 8.1, and when opening traces from UIforETW type Ctrl+E to invoke WPA 10.

For instruction on how to do ETW trace analysis take a look at the series of training videos I created.

I'm a programmer, working for Google, focusing on optimization and reliability. Nothing's more fun than making code run 10x as fast. Unless it's eliminating large numbers of bugs. I also unicycle. And play (ice) hockey. And sled hockey. And juggle. And worry about whether this blog should have been called randomutf-8. 2010s in review tells more: https://twitter.com/BruceDawson0xB/status/1212101533015298048
View all posts by brucedawson →
This entry was posted in Symbols, xperf and tagged UIforETW, WIndows 10, wpt, xperf WPA. Bookmark the permalink.